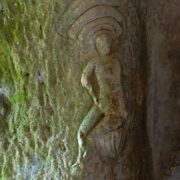 A Venus carved into the rock wall and dated by some from the 5th century, at the time of the fall of the Roman Empire and the great barbarian invasions, is present in one of the caves of the old troglodytic site of the castle of Montastruc. It was venerated until about 1970 at the occasion of the annual celebrations of the Assumption of the Virgin Mary. The parishioners of Lamonzie-Montastruc then came in procession to present in the cave the Virgin of Lamonzie.

Below, an extract of the Society of the archaeologist’s gersois gives an interesting perspective over the origins of the Venus known as Grand Goddess of Montastruc…

« It is therefore manifest that this latest round of cavities concerns subways in magico-religious purpose, whose use was momentary, and where there was no place to resist and defend themselves. Their precise assignment is still often impossible, but we gradually come to understand better this problem, grace known caseload that grows every day. Thus, some may be assigned unequivocally, in funeral worship events; We know indeed much that grow under churches and cemeteries (11); they are put in parallel with the burial pits empty found in the same places, but Swales or liberating ducts in contact with manifest with tombs and sarcophagi, attest that this is funeral cults (fig.4, according to Mr. Ribas 1964). It then considers these pits or these underground as the mansions prepared by the living for the spirits of the dead. The ceiling has two crawling of these cells that we meet later, which evokes a roof, explained as well. When the cemetery is absent and the underground isolated in nature, we need to find another explanation, but always more or less magico-religious and religious. We must think of the old Chthonic myths that make mother earth the origin of all life, be it animal, vegetable, terrestrial or aquatic. We already had an opportunity to recall (12) that the source, caves, and springs were sacred, because that considered the uterine ducts of the great goddess, mistress of the underworld, origin of life in nature. Rural dwellers are necessarily always been particularly sensitive to these myths, and very conservative, they have more or less kept them since the dawn of time. It was therefore quite logical to think to practice religious ceremonies in the heart of this mother earth, to thank her and reinforce the caring attitude. Number of these constructed underground, overdrafts carefully closed to avoid intrusion of land and wildlife, are certainly intended for this use or initiation of officiating priests for the cult. In the Tarn-et-Garonne, Pessoles underground (municipality of Mirabel) delivered a statuette (fig. 5) taken at the beginning for a Virgin and child; It does match no known canon and is in fact a goddess-mother, hands crossed supporting her belly where a child’s head can suggest generator specificity. Eight meters below the surface, one had to penetrate within the Earth and shelter underground did not require such a depth. Therefore, many a place of worship that it is here. We also discovered a woodcut

(fig.6) in a 16th century work (13), which does not seem to have been known to specialists; It illustrates perfectly the worship to the goddess of the underworld, which here takes one child, symbol of life from his breast. There is a worshiping, face against earth, a man in prayer in the position of the orant and others bringing in animals of the underworld (foxes) offering. The underground, depicted many intentionally, do not allow for other interpretations; most of the entries are shown vertical, it should be noted however in the foreground as there are also from horizontal to vertical wells.
Do not forget the seated nude Goddess (fig.7), but without children this time, underground Lamonzie-Montastruc in Dordogne (15), which further strengthens this persistence of distant myths; there is also a figuration of Fox… » 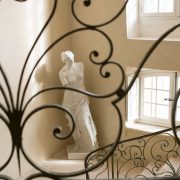 Anonymous (end of the 2nd century BC, during the Hellenistic period). Discovered April 8, 1820 in the island of Melos (Milo).

The Venus de Milo in the Louvre

Material of the original: Paros marble / reproduction material: resin moulded on the original and patina

«After difficult and tumultuous negotiations, the statue was purchased by the Count of Marcellus and brought to France, offered March 1, 1821 to Louis XVIII who donated it to the Louvre»

The Venus de Milo occupies a prominent place in the history of Greek sculpture. Dated circa 100 BC, this original sculpture is a characteristic style of the end of the Hellenistic era that revives classic themes while innovating.

The Venus de Milo is indeed within the tradition of the theme created two centuries earlier by the sculptor Praxiteles. But the master of the Aphrodite of the Louvre was able to free himself from the legacy of the past and emonstrate a creative originality. If the expression on the face retains a somewhat severe coldness, the lively whole body in a twisting motion fits in all dimensions of space. The moving silhouette, with its whirling attitude and its realistic accents well say the genius of the creator of this statue.

It is on the island of Melos (known as Milo), South of the Cyclades, that the statue was accidentally discovered in April 1820 by a peasant, not far from the ruins of a Roman theatre.

Olivier Voutier, a student of marine whose ship was idling in port of the island, noticed the statue and reported it to the French authorities.

Louis Brest, consular officer, and Dumont d’Urville, acting sub-lieutenant, testified of this exceptional discovery to the Marquis de Rivière, Ambassador of France in Constantinople, seat of the Government of the Ottoman Empire, under which rule Greece depended then. At the insistence of the young Embassy-Secretary

other marble fragments by the Count of Marcellus and brought back to France in full ownership. It was presented and offered on 1 March 1821 to the King Louis XVIII, who immediately donated the statue to the Louvre.

Portrait of Lodoïs de Martin du Tyrac, Count of Marcellus, in 1825 by Ingres

During her trip to France, the statue landed briefly at the Château d’Audour, in Dompierre-les-Ormes, property of the Count of Marcellus.

A first plaster cast was executed by the Louvre before any restoration and was offered to the Count of Marcellus in appreciation. This cast is still exhibited in the Château de Marcellus (lot-et-Garonne).

A resin casting (2.20 m, 110 kg) life-size with patina realized by hand and identical to the original was produced in November 2015 by the workshops of moulding of the Louvre Museum and was offered to Ségolène de Martin du Tyrac de Marcellus, direct descendant of Lodoïs, Count of Marcellus, by her husband Philippe Raynaud de Fitte.

This casting marks in 2016 the thirtieth wedding anniversary of the spouses, who met for the first time at the foot of the Venus in the Château de Marcellus. This remarkable identical new cast is exhibited in their Château de Montastruc (Dordogne).

Since its discovery, the Venus de Milo was universally celebrated, and this pious admiration would never know any eclipse. The German romantic poet Henri Heine (1797-1856) called it “Our-Lady of Beauty”. The sculptor Auguste Rodin (1840-1917) praised his “splendid belly, wide as the sea”. The poet Leconte de Lisle (1818-1894) described her as follows: “pure as a strike and a harmony, o Venus, o beauty, white mother of the gods”.